Horses are smart, but are these gentle giants actually able to imitate human behavior?

I have known for a long time that my horse Stanley is too smart for his own good. My other horse has never pre occupied himself with out-smarting me, he’s just fine letting me be the brains of any situation. Stanley, on the other hand, is constantly plotting his next move.  There are many things Stanley has been able to quickly figure out….like how to untie an emergency knot, or escape through a locked gate.

As a kid I hated going to school, everything about math, geography, and social studies made my head hurt–it was all so confusing! I used to wish for a photographic memory, one that allowed me to instantly understand and then recall everything I read. But apparently the grass isn’t always greener– come to find out, many hyper-smart kids hate going to school too, bored not because classroom materials lack humor and pazaz, but because they are always waiting for their peers to catch up. This is how I attribute Stanley’s intelligence to his easily brought about boredom. If he’s left in his stall overnight, an innocent halter hanging from his stall becomes an unrecognizeable disaster for me to find in the morning. It only took a few shredded fly masks and a halter torn into 3 bodies before I shouted to the rooftops: DONT LEAVE ANYTHING NEAR STANLEY’S STALL–HE WILL DESTROY IT! 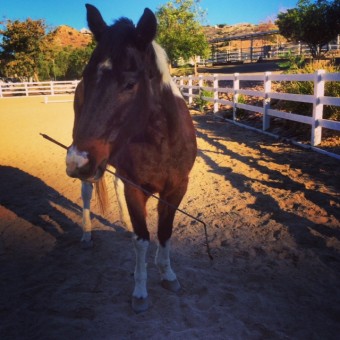 The whip is something Stanley never destroys though, instead he finds it be very useful…

Thankfully, Stanley redeems himself  as a gentleman under saddle, he tries his little heart out no matter what we do–that is until his rider gets too handsy or forgets to praise his successes. With bigger brains comes more demand for respect I suppose. Thankfully, I ride in a way that he prefers and so the two of us get along grandly. So well in fact, that when I ask him to free lunge he prefers to come stand right beside me. This is the only time I bust out the whip, I don’t use it on him, I simply wave it around near his hind end until he takes off, understanding that I want him to run now, not cuddle and look for treats.

I never thought about Stanley being smart enough to imitate me, I thought furry imitations were reserved for parrots, not horses. But apparently Stanley is keeping close tabs on all that I do, and recently he decided that some of my tactics might also work for him. You see, when I turn him and his brother Aspota out together, Stanley wants to run and play and race side by side. Aspota, on the other hoof, is older and lazier, he’s more excited to roll in the sun before finding sweet refuge in the shade. And so the struggle goes, Stanley trying all that he can to get Aspota running with him, and at times he is mildly successful. But then, before long, Aspota decides he’s over it and stops giving Stanley any play. It was during one of these frustrating afternoon turnouts that Stanley decided to try a new trick. 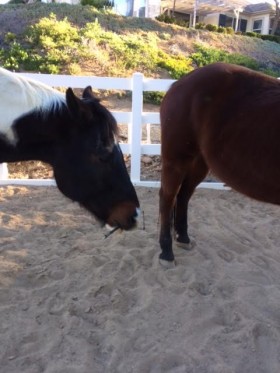 Stanley creeping up on Aspota’s rear, the whip waving in his mouth! Too bad Aspota didn’t seem to notice Stanley’s well-thought out plan.

What do you got there? I asked him, laughing about the whip he had just collected in his mouth (the neighbors probably think I’m crazy, constantly talking and laughing by myself).  This wasn’t the first time Stanley had picked up the whip… he picks up anything and everything he can, including chairs, loose fencing, you name it. Although, things took an interesting turn when he started heading towards Aspota with the whip secured between his teeth. It took me a moment to fully comprehend what was going on, but sure enough Stanley was waving the whip at Aspota’s butt–just as I do to him when I try to get him to run in the turn out! So I guess it