How Dangerous Is Horseback Riding?

It is often said that horseback riding is the most dangerous sport out there, in reality it ranks in at number 3, just ahead of bull riding and cheerleading. It makes sense that horseback riding is dangerous, after all, the average horse weighs 1,500 pounds and we trust them to carry us on their backs. Horses are naturally kind creatures but with animals this big that can travel at 40 MPH and deliver 1000 N of force with one kick, there’s a lot of room for things to go wrong.

Despite the safety breach, I, the girl who was afraid to swing from the monkey bars, just had to ride horses. I never felt the weight of danger these giant creatures possess, instead I felt safest in their presence, no matter how many times I fell off or got stepped on. Somehow, my paranoid parents let me have at it too, as many other nail-nibbling parents do for their horse adoring children. And I’m glad that they did, because despite its risks, horseback riding has provided me with so many rewards.

In one year, 6% of all horseback riders will be hospitalized for an injury; of this 6%, 27% will have already been injured in a riding related accident sometime within the last 2 years. Statistics published on iGrow.org state the average horseback rider will be injured 3.7 times over the course of 1,000 hours of participation. Let’s say you spend around 1 hour a day in the saddle, that’d put you at risk for one major fall or injury every 3 years or so. If you only fall off once every 3 years, you’re not doing so bad! I’d say this is fairly consistent with my own experiences and what I have seen growing up at a barn.

A study from the early nineties found that 39% of all injuries that occur while riding horses results in a trip to the hospital. These injuries don’t have to be anything serious, perhaps a bruised tailbone or a deep scratch that requires a few stitches. As far as equine deaths are concerned, 128 out of every 100,000 riders have their lives claimed each year in a horse related accident. 128 sounds like a big number but it shouldn’t frighten anyone too terribly. The types of equine activities one partakes in will up the chances of mortality significantly, as well as dismissing proper safety gear and precautions. For instance, equine sports like eventing, jumping, and bronc riding carry higher risks than dressage riding. 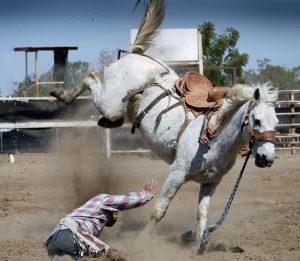 Preventing horseback riding injuries starts with understanding the leading causes, which include:

When discussing dangerous equine sports, cross country jumping instantly comes to mind—horse and rider out in the wilderness jumping solid fences over uneven terrain, under highly unpredictable conditions—it’s a great recipe for getting hurt. When a stumble occurs in the arena, a horse is better able to regain his footing, plus there isn’t as much to trip the horse up in the first place. On the contrary, out in an open field galloping over hefty tree trunks, and jagged rocks, there’s plenty to trip a horse up and potentially knock them off balance all together. When a horse falls, he or she will often land on their rider, a cause of injury associated with the worst equine injuries seen amongst ER doctors.

For those who can’t escape the thrill of a difficult x-country course, look into safety vests, a grade-A helmet, and a trainer with the knowledge to set you up for success out there. These days the sport is only getting more dangerous with course-creators admittedly upping the ante in order to compensate for the handful of professionals demanding more challenges.

It’s not just out on the big courses where horses and riders get injured, isolated and random events make up the vast majority of injuries around horses; and isn’t that how it always goes with horses? You are checking your cell phone or scanning the clouds when, boom, suddenly your horse decides to bolt, buck, or act completely out of character.

Lisa Zeppegno, an acupuncturist from California, found herself with compression fractures of her L1 and L2 lumbar vertebrae, sacrum, and the bone at the base of her spine, all after a mundane trail ride turned sour. Lisa and her friend were thrown from their spooked horses after 2 young bike riding boys illegally cut across a trail marked for horses only. The women’s cries for help went ignored as the boys hustled off in a panicked hurry. Thankfully, no one was hurt beyond repair, but it just goes to show that anything can happen anywhere, even if you are only out walking on a quiet rural trail.

Is Horseback Riding Dangerous For Kids?

While researching the safety of horseback riding, parents might find comparisons to how it is more dangerous than riding a motorcycle. Of course, that’s not something you want to hear if you are about to enroll your 12-year-old at the local riding school, but how dangerous are horses, really?

According to a study published on the National Library of Medicine, female riders between the ages of 10 and 20 were the most common population group to visit the ER for horse related injuries.  Of these injuries, the most common are fractures and head injuries. The most serious injuries were caused by falling off a horse and either becoming dragged or crushed. Although, it’s important to note that 30% of these injuries were caused by a hoof kick when children were not mounted.

In 2002, it was reported that 13,400 children under the age of 15 visited the emergency room for a horse-related injury. “When using a severity score to compare it with other childhood injuries, equestrian-related injury ranked second only to pedestrians being struck by a car,” reads a review of Horse Related Injuries in Children published to PubMed.gov.

Being careful with kids and teaching them the important safety rules and regulations before they start to ride or handle horses independently is key to keeping them as safe as possible. Enrolling children in lessons on a pony instead of a horse is also known to reduce the chance of a serious injury, as a pony is much smaller than a horse, and therefore, can’t do as much damage. Also, wearing helmets is well documented to reduce the risk of head injury. Any well qualified and reputable riding school should strongly enforce the use of riding helmets.

Speaking of helmets, according to a 2007 study published by trauma room surgeon Dr. John Mayberry of the Oregon Health and Science University, 38% of injured riders received a head injury that was potentially preventable if they’d only been wearing a helmet.

Does Rider Experience Have Anything Anything to Do It?

A study undergone at a rural Colorado hospital found that 55% of injured riders were inexperienced, 10% were intermediate, and 35% were experienced. This proves that the more education and experience one has around horses, the less likely they are to be injured, that is unless they know too much. The fact that advanced riders were injured more than intermediate riders is curious, but isn’t without plausible explanation. After all, advanced riders tend to spend more time at the stable taking on more difficult (and risky) tasks while having a more relaxed, and ultimately vulnerable, stance around horses.

Around 38% of all horse related accidents are preventable, and while there’s nothing Lisa Zeppegno could have done to stop those bike riders from scaring her horse off, at least she had a cell phone on her and was able to call for help. While some accidents are preventable, the unpreventable can be made less serious if the proper precautions are in place. We never think today is the day I am going to fall off, which is why it’s so easy to leave the bulky safety vest in the tack room. The truth is that you NEVER know when something will happen. Always be prepared for the worst case scenario and it could save your life.

As an adamant horse lover I can’t ignore that it’s not only riders that get injured when things go wrong. Horses are often injured in equestrian sports as well, sometimes by mistake and sometimes due to human error or outright abuse.

Playing it safe around the barn and respecting the power of a horse can help riders and horses live in peaceful harmony.  Be alert and aware, leave the cell phone (and any other electronic distractions) on silent in your pocket, carry the proper protection for yourself, and always be aware of your horse—what he’s looking at it, thinking, and positioned to do next. No matter how careful you are, you can’t prevent all injuries but you can reduce your risks. 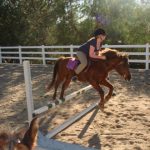 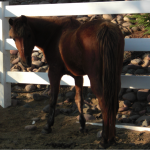 Is My Horse Happy? A Horse’s Wish ListBlog, Equine Confessions