The Power of Half-Halts: Retraining a Horse Who Canters Too Fast

Find out how half-halts helped me get my canter back on track with a horse who just wanted to run, run, RUN… faster and faster he’d go. 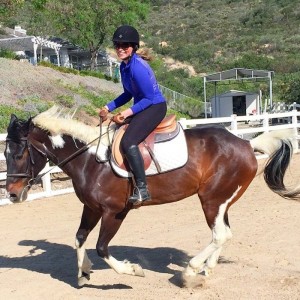 What do you think about when you ride? If you’re anything like me, it’s next to nothing. In fact, it’s one of the few things that makes my otherwise buzzing brain go silent. When my horse Stanley tracks too close to the arena fence I might think, ‘uh oh, my leg—push over!’ And if something predictably spooks him near the bush full of bunny monsters, I might think: sit back, hold steady. But otherwise, as I ride along, my mind is playing a peaceful hum. Even when the tree branches hit me in the face with a wet slap I keep on grinning. After all, there’s just nothing like horseback riding. Even in all of its glory, any seasoned equestrian can agree that some horses provide a much more peaceful riding experience than others.

Take my horse Stanley for instance. Two years ago there were few places less stressful than atop his back when he cantered. Sure, it wasn’t the regular to-do lists cluttering my mind, instead I was constantly thinking: how will I ever slow this horse down? He just wanted to go faster and faster with each break-neck turn. One trainer told me to put him away to pasture for a year, and then retrain him again.  Another trainer told me to try endless circles when he went too fast, let him work harder until he slowed down. Since option number two seemed a more reasonable place to start, circle I did, but Stanley didn’t care how many circles we made, he just kept on flying. I’d be up there huffing and puffing, my lips chapped and my throat dry, just trying to keep up with Stanley. And yet nothing I tried seemed to be working.

The Power of Half-Halts: Giving Your Horse Some Brakes

“I know,” my younger sister would sympathize, “Stanley is really hard to ride.” She knew as well as I, she was his original rider, the one who begged and pleaded for him before realizing he was too much horse for her. At which point, she swiftly passed him onto me—so his speed was now my problem. And so we raced and raced around the arena until a trainer came along with a simple solution. “He just needs a set of breaks.” She told me, with a slight country twang. My first thought, but he has breaks! He knows what ‘whoa’ means—but did he really? Clearly, the state of his canter was screaming otherwise.

Since his other gaits offered a comfortable and controllable pace, I never thought he had poor breaks altogether, therefore I never thought to work on endless half-halts while walking and trotting. Although this is exactly what trainer #3 advised me to do. So up and down the long sides I went, half-halting all the way. “And again.” The trainer would instruct me. Seriously? I’d be sweating and thinking, but I’d do it, over and over until I thought Stanley might kill me over repetition.

But then, before Stanley got the chance to plan my demise, all of the stop-and-go really started to pay-off. His antsy attitude and high-held head began to relax, he puffed some air out of his nose, and stop, go, stop, go, we continued along without fault. Stanley’s newly acquired breaks worked just as well at the canter as they did at lower gaits. Once I sat back and relaxed, stopped pulling on his mouth and squeezing tight with my seat in attempts to slow him down, he relaxed a bunch too. The first few times I experienced a truly controlled canter I was ecstatic, and today (more than one year later) I still don’t take it for granted.

Finally, we had a controlled canter that didn’t increase in speed every time we went around the arena, but this deceleration brought about a host of other suddenly noticeable issues. For instance, Stanley’s corners were a mess. Bending? What’s that? In fact his turns were the one place he still liked to speed up and flat line the most! And so we were assigned even more half-halts, now at the canter and just before each corner. Guess what? It worked!

Today Stanley canters like a four-legged gentleman, he can go fast or he can pull it together nice and slow. The moment he starts to feel strung out, his mind anywhere but on my aids, I start up with the half-halts, the exercise that always helps bring us back together again.

Moral of the story? When cookies don’t taste right it’s probably because a core ingredient is missing. In horsey terms? If you’re having a major issue with your horse, look towards the most fundamental solutions to get your riding back on a peaceful track! 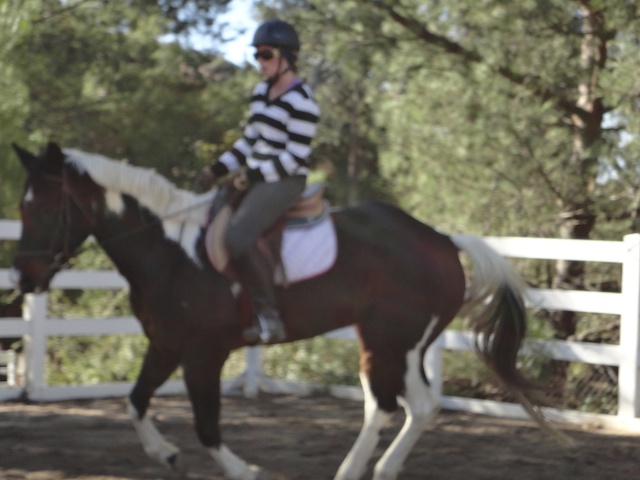 Stanley and I enjoying a peaceful morning ride together, all thanks to half-halts!

canters too fast, half halts, retraining a horse 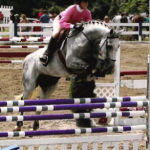 What Do The Most Expensive Horses For Sale Cost?Blog, Equine Confessions, For the Love of Horses 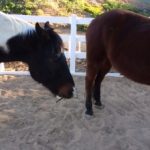 Do Horses Imitate Human Behavior?Blog, Equine Confessions, For the Love of Horses