Horseback Riding In Your First Trimester: Riding Horses When You Are 1 to 2 Months Pregnant

By Becky
Posted August 5, 2019
In Blog, Equine Confessions, For the Love of Horses, Horse Riding, Riding pregnant
Horseback Riding In Your First Trimester: Riding Horses When You Are 1 to 2 Months Pregnant2019-08-052019-08-05https://beckybruce.com/wp-content/uploads/2015/11/sadsa.pngOfficial Website of Becky Brucehttps://beckybruce.com/wp-content/uploads/2019/07/riding-1-month.png200px200px
0
0

When I first found out I was pregnant, I started Googling “riding horses while pregnant” and “horseback riding first trimester” like a mad woman trying to find any information I could about it. After talking to other equestrians, I was fairly confident I could keep riding through my first couple months of pregnancy. In fact, I got busy trying to squeeze in as many rides as I could while I was still feeling like myself. 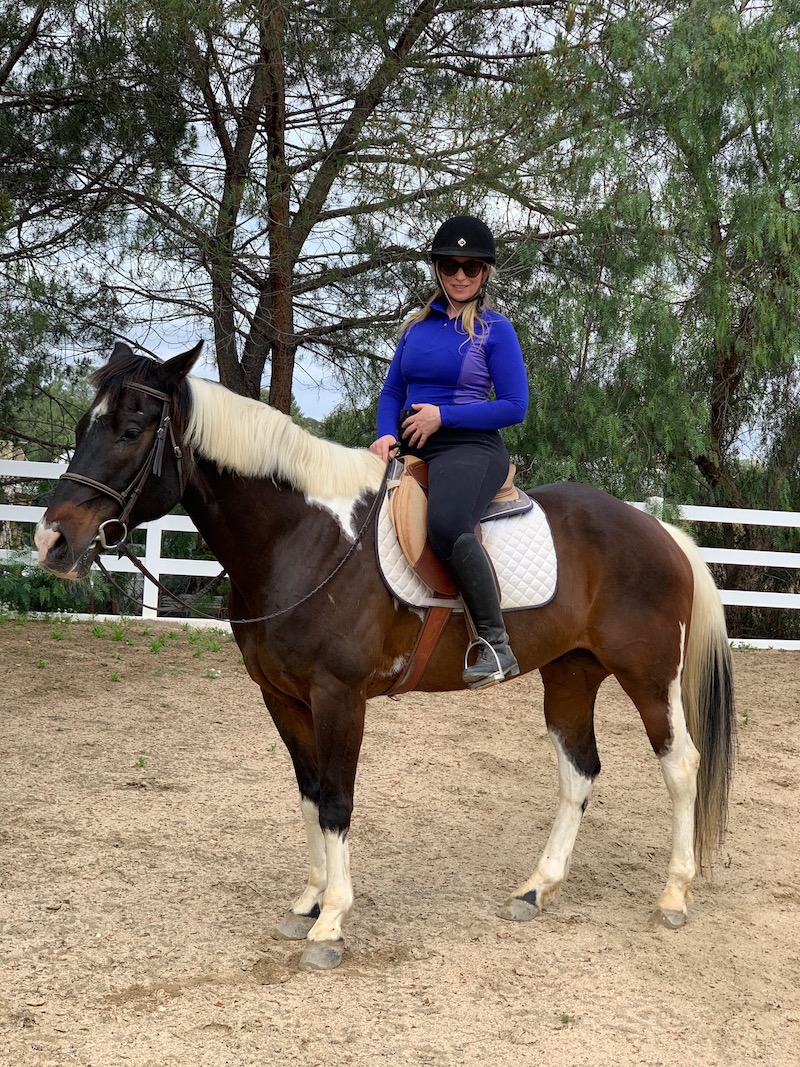 I felt great until about 1.5 months into my pregnancy. That’s when the all-day persistent nausea hit. It would start around noon, sometimes even earlier, and linger around all day long. I never threw up, so I knew I had it good compared to a lot of other mamas out there, but it was still terrible to have nagging nausea following me everywhere.

I was moody and miserable and the only relief I got was from eating crackers, pickles and TV dinners (I weirdly craved Amy’s enchiladas and mac and cheese for the first 2 months). Oh yeah, and riding horses.

Some days I thought I was too nauseous to get in the saddle, but I found that as soon as I started riding, I felt so much better. Most likely because it gave me a distraction and so I couldn’t even think about feeling sick – I was too focused on harnessing Stanley’s energy for good, collecting the trot, and keeping him on his hind-end throughout the canter.

Horseback Riding First Trimester: What’s it Like to Ride at 1 Month Pregnant?

There is really no difference at all, I felt completely normal at this stage in my pregnancy even though I was technically riding for two. 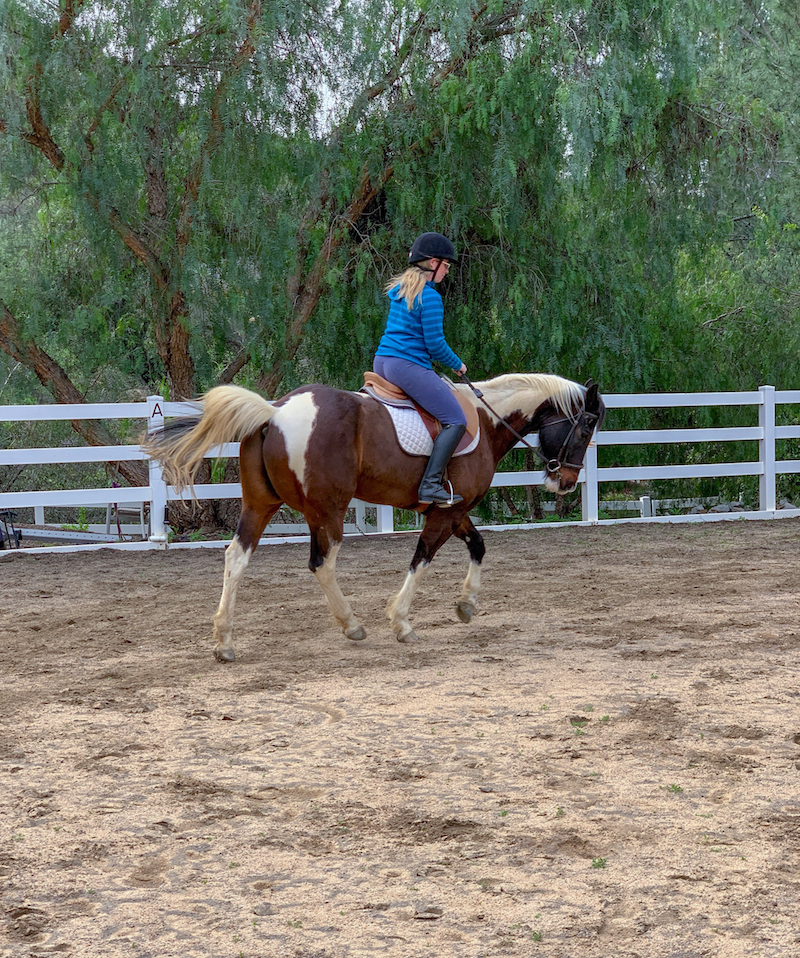 By this time in my pregnancy I was feeling sick a lot, but as I mentioned before, that tended to blow away with the dust when I was riding – just like all of life’s problems, can I get an Amen?

My inner thighs became really sore at this stage in my pregnancy, even more sore than they are now (I’m currently four months pregnant). My doctor told me that it has to do with excess blood flow and all of the muscles and tissues expanding. At the beginning of every ride, I’d feel the tightness in my thighs, and it made me feel a little weird and wobbly up there. Thankfully, as my warmup progressed, the tightness tended to dissipate, and I started to feel more normal.

Other than that, I felt completely normal while riding at 2 months pregnant. I could even still fit into my regular riding pants!

My doctor gave me the green light to ride and enjoy myself. To be fair, I didn’t really ask – I sort of said, “I plan to ride until I’m six months pregnant, how do you feel about that?”

Without hesitation he said he felt fine about it. He went on to reference a Canadian study in which there were two groups of women – one group was put on bed rest and the other group was instructed to continue all of their normal activities (including horseback riding). At the end of the study, researchers found no difference in miscarriage rates between the two groups. 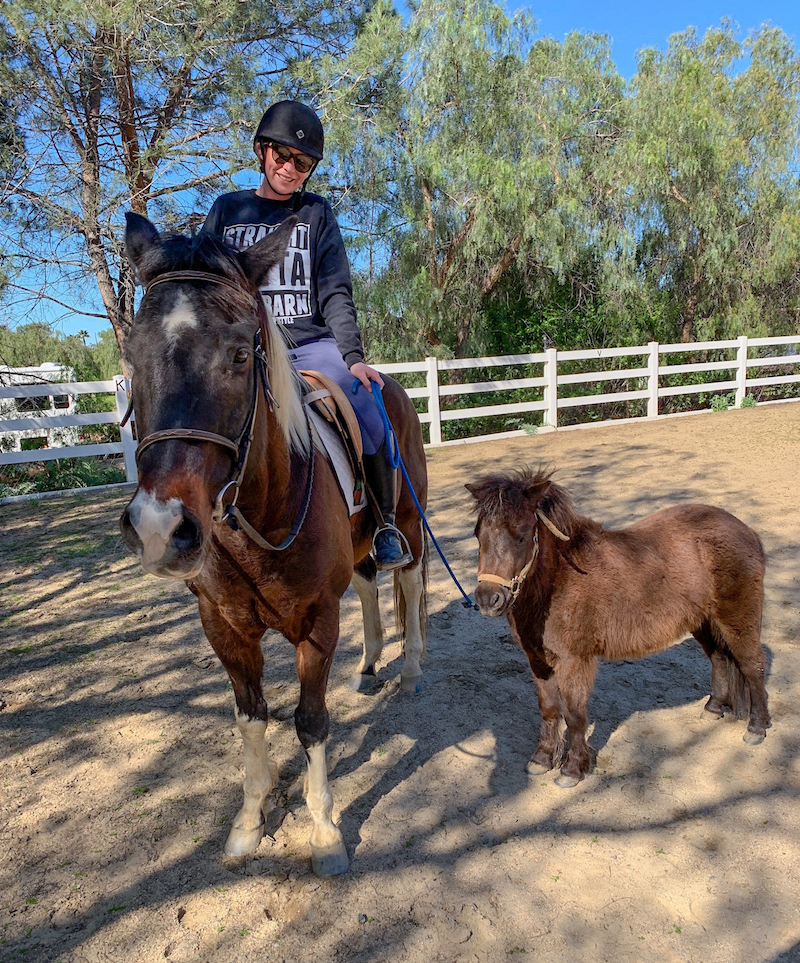 Taking Precautions When Riding Horses In Your First Trimester

Even at one to months pregnant, I stopped jumping or going out on trail rides – not everyone would go to this extreme, completely understandable and you’re probably fine doing what you normally do, I just wanted to decrease my risks as much as possible.

I wouldn’t recommend riding any crazy horses or jumping on a horse you’ve never ridden before. I stuck to riding my trusted 15-year-old gelding who I have been riding for years. Sure, I’ve fallen off of him in the past, but I trust him a lot and overall, he’s a really well-behaved horse.

Will your baby get hurt if you fall off while riding your horse in the first trimester?

You could get hurt if you fall off while riding your horse and so, of course, you are putting your baby at some risk – especially by partaking in activities under saddle that increase your chances of falling off, like jumping or galloping down an unknown trail. That being said, you are also putting yourself and unborn child at risk when you get in your car, swim in the ocean, or do a host of other activities.

I’ve read a lot on the matter, and even talked to my doctor about it, and it would be very difficult to harm your baby in a fall unless the horse falls on you or you become badly injured. A lot of moms around the Internet have shared that they fell off in their first trimester. I read about one woman who took a direct hit to her stomach when she landed over a jump pole (she was one month pregnant). Her baby was completely unharmed, as was she. It is difficult to harm the baby at this stage because it is so tiny and deep in your womb that it is well cushioned and protected. That’s not to say it can’t happen, so always proceed with caution.

Do you plan to ride throughout your pregnancy? 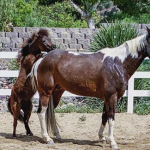 Is it Safe to Keep Mini Horses and Big Horses Together?Blog, Confessions of a Horse Owner, Equine Confessions, For the Love of Horses