The other weekend I had the pleasure of attending the Alycia Burton Free Riding Tour in Norco, California – and it was AMAZING! Not only was it hosted in the coolest horse town in the world (people ride their horses to bars here, see photo below), but the show was inspirational, moving, and full of incredible advice. 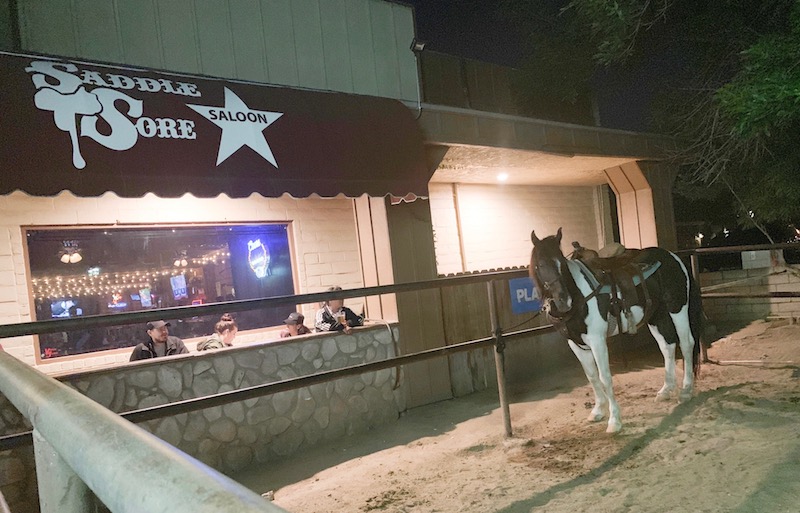 It’s easy to look at Alycia’s Instagram and think she must have been raised wealthy – it clearly looks like she has it all and is living the dream. Not to mention, how BEAUTIFUL is Goldrush, her main squeeze?

Looks can be deceiving. Alycia was born in New Zealand to a poor family who mowed lawns for the neighbors in exchange for milk. They even made their own clothes. Luckily, Alycia’s mom always had a horse or two sitting around and so she rode whenever she got the chance.

As many of us horse-fanatics can relate to, simply being on a horse was freeing and made Alycia’s heart soar. She would frequently hop on horses in the paddocks with no tack and just play around, eventually this turned into her jumping with no tack.

Goldrush was bred by family friends and Alycia got him as an untrained 7-year-old for next to nothing. He reared and bolted and did all sorts of naughty things. As she likes to say, if I can train Goldrush to go without tack, any horse can be trained to go tackless.

Alycia hit rock bottom about ten years ago. She was drinking all of the time and incredibly unhappy. That’s when she heard a calling from God. After attending church, she made the decision to change her life around and go after her dreams. She hasn’t looked back since. 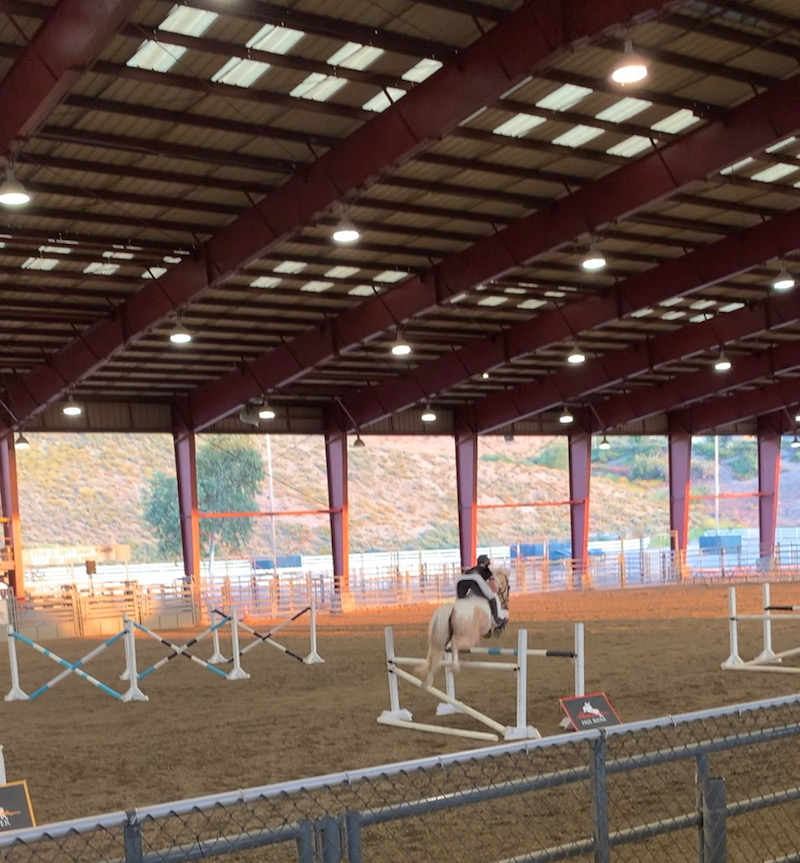 1. It can take forever to train your horse something, even when you’re Alycia Burton.

It takes a lot of time and patience to teach a horse something, and you never know how long it will take because each horse is different. Teaching a horse to respond to aids off the neck rope, or Free Rein, that Alycia uses is no exception.

She said that she gets many emails from people who say they tried using the Free Rein, but it just didn’t work. That’s because it takes time and a lot of patience. She said you must start with the bridle and the neck rope on at the same time, not just once but many times over. From there you apply the aid your horse knows for stop followed by a gentle tug on the neck rope. When your horse responds, give him or her lots of praise.

Eventually your horse will associate the tug on the neck rope with the aid for stop or slow down. Just because your horse is responding to the aid one day doesn’t mean they will respond to it tomorrow. That’s why you must keep repeating the same thing over and over. If you take the bridle off and they don’t respond to the neck rope, don’t get angry! Instead, put the bridle back on and keep working on it.

During the Free Riding Tour, Alycia used the name “Sally” to describe all of the girls she’d grown up around and wished to be like. Girls whose parents could afford to buy them a horse and new boots. Meanwhile she was using duct tape to hold her boots together.

We all dream of a nicer horse, a better saddle, a set of gold Lorenzini stirrup irons. Yet, that’s not what makes you a better rider. The best riders are made out of sheer determination, hard work and endless practice. Not fancy horses that already know what they are doing, or top-dollar tack. Alycia Burton serves as a perfect example of that. After all, she’s riding with no tack at all!

3. She gave up everything to tour the US and help make a difference in kids’ lives.

Before coming to the US, Alycia was living in Australia for two years, performing, teaching lessons and running youth retreats. Her heart told her it was time to come to the US and bring her message to the States. Sadly, her husband at the time didn’t feel the same tug and couldn’t find it in his heart to make the move to the US.

So, there she was – stuck trying to decide if her dreams to help more children in the US were worth giving up a marriage she’d worked so hard for, and to a man she loved very much.

When she thought about helping one or two, or even three, kids in the US it didn’t seem like enough to give up her marriage. Yet, when she thought of helping 5, 6+ kids, suddenly it seemed selfish of her to stay. And so, she made the very difficult decision to give up everything, including her husband, to come to the US.

Two weeks after arriving in the States she received a call that would break her. Her husband had been in a terrible accident and he was on life support. Sadly, she would never see him again.

4. She has never paid more than $500 for a horse, and she got Goldrush for free.

Goldrush is a dreamboat with the most beautiful white tail ever. He appears to listen to all of Alycia’s aids with grace and ease, and so it’s easy to assume she paid some exuberant price for him. Think again!

Alycia got Goldrush for FREE. Goldrush’s breeders broke him in at 4 years old, but he was so difficult that he ended up sitting untouched until Alycia got him when he was 7. At which point, he was a lot of horse to handle- he bolted, bucked and reared and was very nervous by nature. Alycia spent so much time with him just calming him down, and her tactics worked thanks to a great deal of patience.

It took her forever to teach him some of the smallest things, like how to lower his head and keep it there while waiting for her to put a halter or hackamore on his face. He was so nervous and antsy that holding his head down in this submissive position was difficult for him.

5. She never spends more than 10 minutes working on the same thing because she doesn’t want to overwhelm the horse.

Repetition is your best friend when it comes to training horses, or kids. Instead of going all-in one day, Alycia will spend 10 minutes every single day working on something until the horse gets it. That way she doesn’t overwhelm them.

She’s a fabulous public speaker – I’d say she knocked it out of the park when I saw her perform. Yet, surprise, she’s terrified of public speaking – just like 75% of the world. She pushes herself to do it every single week because she said she’s even more terrified of the thought of not taking the opportunity to do it. 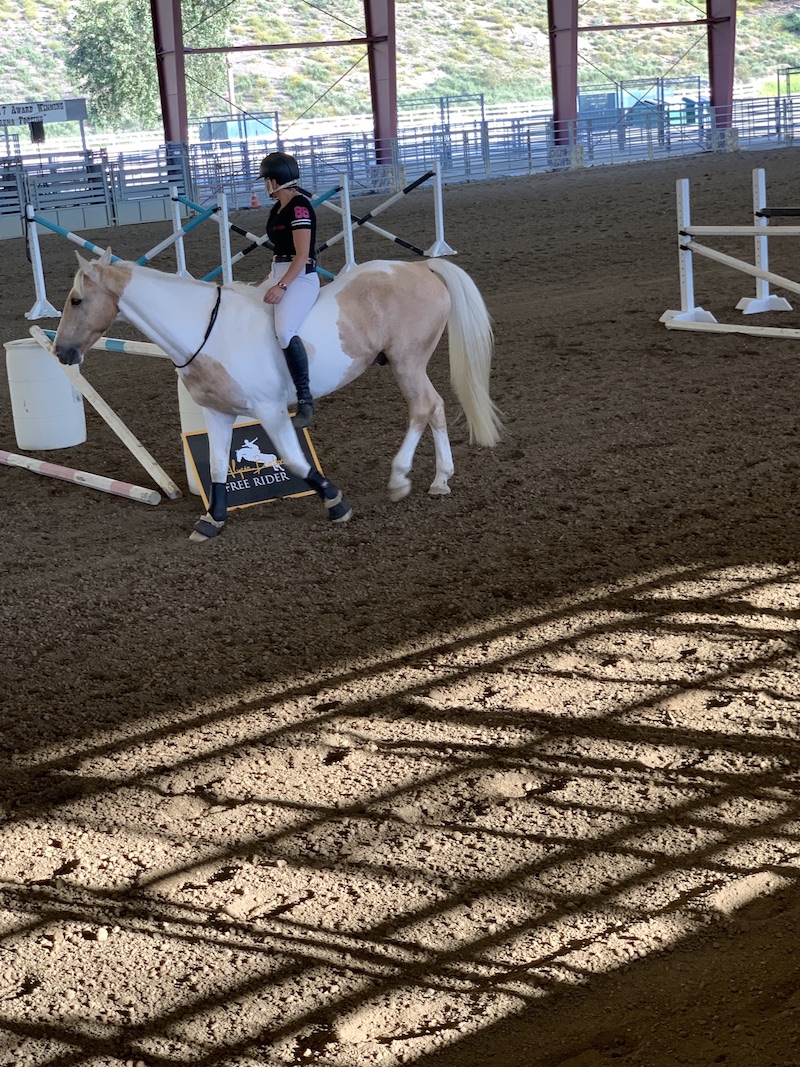 7. She has no problems knocking over poles when jumping.

“Who said knocking over poles is a bad thing?” She asked the audience at one point. “I dunno,” she said with a giggle and shrug.

When she does knock a pole, she just resets up her positioning, comes back at the fence, picks the horse up before the fence and focuses on making it over clear.

She’s not about beating the horse to death about anything. It’s all calm and cool with this riding pro who says she will always praise her horse for making an effort, even if that effort results in a knocked pole.

8. She always puts her horse first.

Before the night really got going, she warned that if Goldrush wasn’t up to jumping the larger fences set up throughout the arena, she’d take them right down. She’d even make them into poles if she needed to. She said no matter what, there’s always tomorrow, and her horse always comes first.

She used to jump Goldrush over huge fences– you can see many pics online of her jumping over impossibly large jumps, including trucks, without a saddle or bridle. Then, one day, she realized that each horse can only jump that high so many times in their life before they are no longer sound, and so she decided to scale it back. 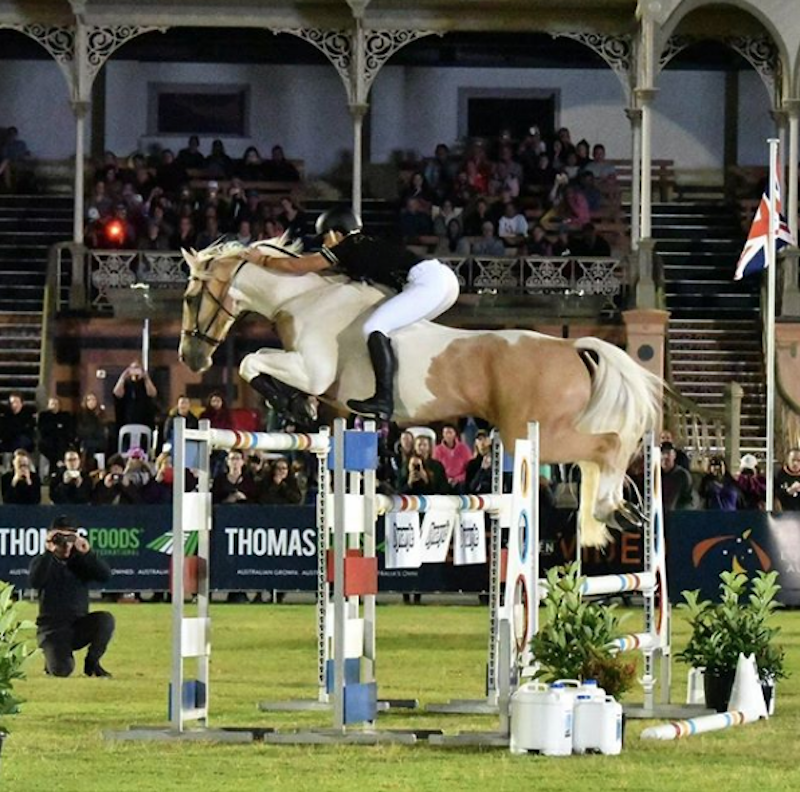 Goldrush is 16 now and she doesn’t want to push it. “There’s nothing keeping him sound,” she explained. And she’d like to keep him sound for as long as possible. So instead of wowing her crowds by leaping over cars or the biggest fences out there, she continues to wow the crowd without putting her horse at risk.

9. She puts on these shows out of her own pocket.

My ticket was free, and I know most other people enjoyed a free ticket as well. Days before the event I received a text that I could even bring a friend for free!

So, how is she paying for all of this?

She says she pays for it out of her own pocket and sells merchandise to help keep the lights on. My sister and I bought an awesome hat while we were there, and I noticed lots of other people stocking up on goodies – including sweaters, posters, and informational DVDs. 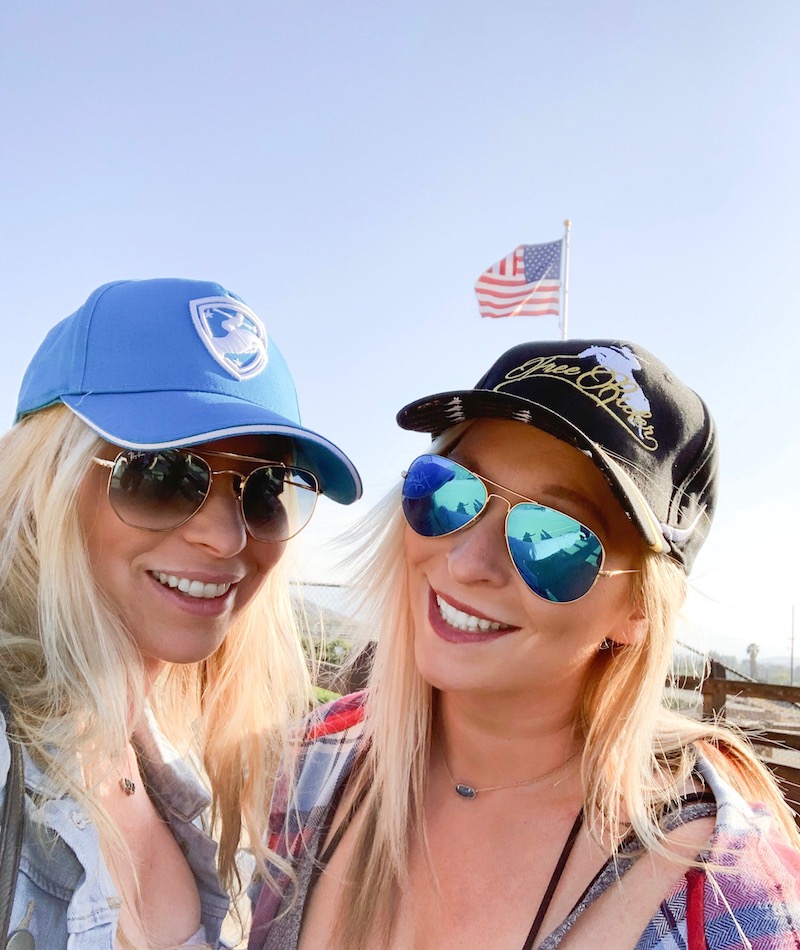 She had something at every price point, from $3 bracelets to $99 jackets.  If you plan to come to the show, come prepared to buy something to show your support and give this lady some thanks for her efforts.

Alycia is a doll in real life. We were the very first people to arrive (you’d think I was going to meet the Queen of England I was so excited). The only other souls on site at that point were Alycia and her two horses. I galloped over to them, no ropes had even been set up yet to block me from petting the younger of her two horses. I saw Alycia and my heart fluttered like some teenager around her crush – she came right over, chatted with us a bit and took a picture with me. 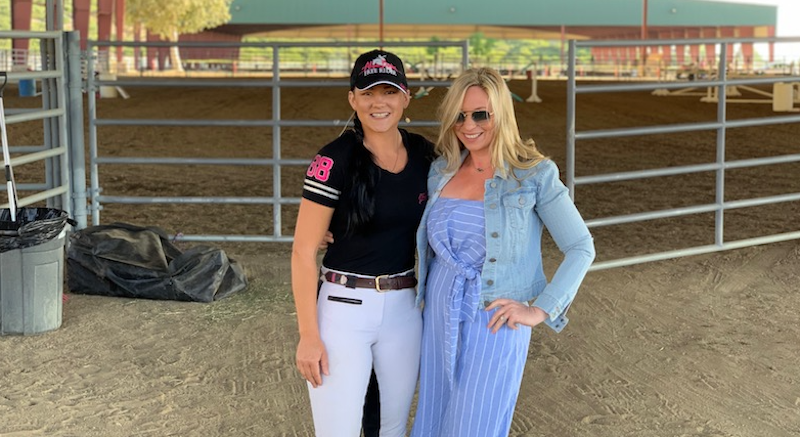 After the show, she stayed until the very last person had left, taking pictures and talking to fans. This girl has a heart of gold. The best piece of advice I can give you? Find a Free Riding Tour near you and GO! 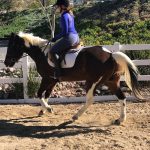 How to Know if You Are a Bad Horseback RiderBlog, Equine Confessions, For the Love of Horses, Horse Riding

8 Reasons Norco is the Best Horse Town I’ve Ever Been ToBlog, Equine Confessions, For the Love of Horses, Keeping Horses at Home