Is it Safe to Keep Mini Horses and Big Horses Together?

Meet Stanley and Smokey – two good ol’ pals who are, clearly, vastly different sizes. Smokey is just under 9 hands, while Stanley measures over 16 hands. Smokey loves to pester Stanley – he bites at his legs and climbs atop his back, and Stanley seems to love the abuse.

These two only started living together around 4 to 5 months ago. Prior to that, Stanley lived with a full-sized horse, who was my heart horse for 20+ years. I’ll save that story for the end of this article – for now, I’ll stick to what you came here for…

Is it Safe to Put A Mini and a Full-Sized Horse Out Together?

Long story short, proceed with caution! A big horse can hurt another big horse, and they can do even more damage to a little guy. Before putting them out together, make sure that the two like each other and that there is nothing for them to fight over, say for instance a pretty mare or limited food. Otherwise, the little guy is likely to lose out and it’s not a fair fight. 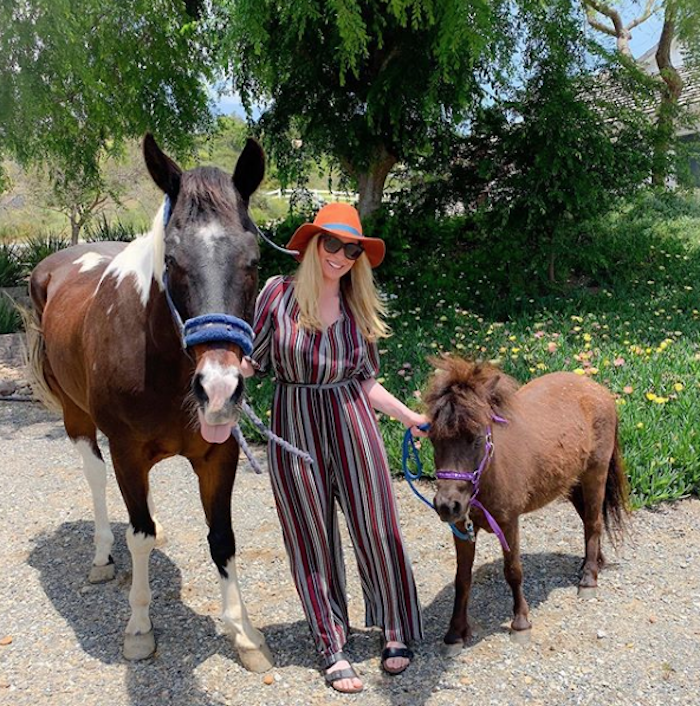 As long as your horse is nice by nature and you take it slowly and carefully, I think it’s perfectly fine for big horses and mini horses to live together. My horses have their own separate space for most of the day, but I know a lot of people pasture a mixture of big and mini horses/donkeys together 24/7.

Start by letting them get to know one another while two experienced horse people keep them contained by halter. Cross-tie them side-by-side, take them for walks, and just give them plenty of time to sniff one another out before setting them free. This is helpful for you to determine if they like each other or if there seem to be any aggression issues.

I have 24 x 24 stalls; so for the first couple weeks, Smokey and Stanley socialized solely through the rails.

The first night Smokey was with us, Stanley stood guard over him like a protective parent, watching him all through the night. Keep in mind, Stanley is a sweet 15-year-old gelding and while he’s mischievous and far from perfect, he’s overall a very nice horse.

I waited for a nice hot day when the boys were pretty calm to try my luck at putting them out together. I made sure to ride Stanley first, so he was calm and tired. Then I took off his tack and let him loose in the arena before I went to fetch Smokey.

At this point, the two were already obsessed with each other. When I’d take one out, the other would scream and scream until they were reunited.

I kept their halters on them and just removed their lead ropes so I could easily fetch them if they started to get too crazy. At first, they just hung around one another like no big deal… but then, things got kind of weird.

Stanley whipped his head around in disbelief but didn’t seem pissed off or anything. We shooed Smokey off once again and let me tell you, we were cracking up laughing at this point.

This could have ended badly if Stanley wasn’t patient or if he didn’t like Smokey, but I already knew he was a kind horse who didn’t kick, and he adored Smokey. Also, Stanley does not have back shoes, so that put me a little more at ease.

Smokey continued to pester at Stanley, biting at him and such, and so we decided to split them up and try again another day.

The next time I put them out together they seemed to establish a routine. They forage through the dirt looking for weeds, trot around a little and then get to playing – and let me tell you, horse play looks crazy, especially when one of the horses is so much smaller than the other.

One day, they started to get so rowdy, with Smokey biting Stanley’s back legs, and Stanley leaning back as if he were going to sit on him. So, I decided to quickly split them up. Then, I went home and started researching all about horse play – and I realized I’d probably split them up while they were having the time of their lives and I felt pretty bad about it.

I also sent videos of them playing to some trainers I know, and they all agreed they were just playing. Of course, the little guy could absolutely get hurt, but chances are Stanley would be careful because horses know how to interact without hurting one another.

Biting is something horses just do to one another, so if you notice a mini and big horse biting at each other, chances are, they are just playing.

Signs that play time is no longer safe:

The mini trainer I purchased Smokey from told me that Smokey would more than likely be the one bullying my big horse – I didn’t believe it then, but Napoleon syndrome is a real thing.

Speaking with other horse people who own minis and big horses, I’ve found that it’s rather common for the minis to run the pack, and they are really good at standing their ground – as little as they may be.

Of course, this isn’t always how it goes. Case in point: My neighbor recently adopted a mini to live with her stocky Haflinger pony. Their size difference isn’t Stanley vs Smokey status, but it’s still considerable. So far, her mini has been just fine, but my neighbor’s pony wants to dominate the mini and the mini is highly submissive, so she just runs away instead of standing her ground or interacting.

Every horse has a unique personality and disposition, so it is always a possibility that your mini will not be a bully. It’s also possible that the big horse will unsafely bully the mini – that’s why it’s so important to slowly and carefully introduce the two, as opposed to sticking them out together in a large paddock for the day with little to no supervision.

The Other Side of the Argument

Some people will argue that you should NEVER put a mini out with a big horse. As the saying goes, “everything is fine until it’s not.” You do increase the risk that your little guy or gal gets hurt when they hang out with a bigger horse. That’s a risk you don’t want to overlook.

Mini horses are at the prime height for a kick to the head, which can be deadly. That’s why I can’t stress enough the importance of proceeding with caution and separating them right away if the bigger horse shows signs of kicking at the mini, pinning his ears and cornering the mini, or other highly aggressive tendencies that are more than just a playful good time.

In case you were wondering…

As Aspota (my first horse who I had for 20+ years) neared the end of his life, I knew Stanley would need a new friend, but I wasn’t ready to sign up for another full-sized horse. I am a firm believer that horses cannot live alone. They are pack animals and I think it’s cruel to make them live without another four-legged companion. I wasn’t about to let Stanley go even one night alone.

A mini horse, goat, or mini donkey seemed like my best bet. Honestly, as adorable as goats are – and as much as I LOVE goat yoga – I know nothing about keeping goats, so I decided to stay in the horse world and go with a mini.

The first mini horse rescue I reached out to said they would not sell me just one mini, that I needed to take two because minis are not happy living alone with just a big horse. This concerned me. I didn’t want to make a mini unhappy.

I quickly realized that other mini horse rescue places didn’t have the same policy and they were just fine selling me one mini to befriend my big sweet guy. Still, I had my hesitations.

I talked to my vet, farrier, random people on the Internet, and everyone seemed to think keeping a mini with a big horse should be fine. So, I decided to give it a go. I figured if the mini seemed unhappy or if things didn’t work out, I could always get another mini to be his friend.

My mini ended up arriving the day I put Aspota down – crazy timing, I know. The poor mini probably thought he’d entered hell, watching us all cry like big babies as we put down a horse within viewing distance of his new stall.

Needless to say, he seemed a little skeptical of us for a few days, but since then he has settled in nicely and seems to be loving his life with Stanley and my whole family now.

We still miss Aspota every day, even Stanley messes with his blanket – which I haven’t had the heart to wash yet – whenever he gets a chance. Yet, little Smokey has helped to heal our hearts and watching him and Stanley play brings smiles and laughter to us all.

Have you ever kept a mini horse with a big horse?

I’d love to hear about your experiences in the comments below!

8 Reasons Norco is the Best Horse Town I’ve Ever Been ToBlog, Equine Confessions, For the Love of Horses, Keeping Horses at Home

Horseback Riding In Your First Trimester: Riding Horses When You Are 1 to 2 Months PregnantBlog, Equine Confessions, For the Love of Horses, Horse Riding, Riding pregnant